Artemis - Everything About The Goddess Of The Moon

To use the bow and arrow, Artemis had to be in a proper psychological state.

Artemis or Artemisia is a goddess of the moon, hunting and wildlife. She is the daughter of Zeus and Leto and twin sister of Apollo. In Rome it received the name of Diana.

Legend has it that Leto, pregnant with Zeus, sought a quiet place to give birth to babies. Due to Hera’s wrath, no place welcomed her, for they feared the retaliation of Zeus’s wife. It was then that the barren, floating Island of Ortigia, which did not belong to Earth and therefore had nothing to fear from Hera, housed Zeus’s mistress. Leto, writhing in pain, waited nine days and nine nights for the birth of the twins, for Hera held the birth goddess with her. Leto gave birth first to Artemis and then, with her help, to Apollo. Seeing the sufferings of his mother, Artemis vowed never to marry and remained a virgin.

Artemis earned from his father Zeus a silver bow and arrows and a lyre of the same material (his brother Apollo received the same gifts, only gold).

To use the bow and arrow, Artemis had to be in a proper psychological state. 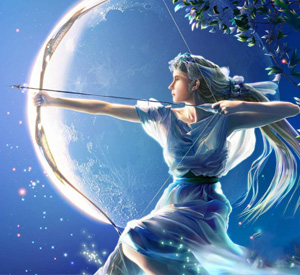 She became queen of the woods and had a court of Nymphs, who took an oath of total detachment from male figures. It is represented with short, pleated tunic.

Artemis is a virgin goddess just like Hestia and Athena. But it is indomitable, vengeful and fierce. But the fact that she was a virgin did not prevent her from watching also about female fertility.

Artemis did not live on Olympus, its habitat was fields and forests, among the animals that inhabit them. She was the only one with Dionysus, who was always accompanied by a procession.

To understand Artemis as an archetypal image it is necessary to understand the moon, a satellite associated with it. The moon is associated with the feminine, governing the woman’s menstrual cycle, the tides and the fertilization of animals and plants. Fickle and changeable, it is a source of moisture and brightness at night. Its light is sweet, diffused and tender.

At each phase of the moon, the Greeks associated a goddess. Selene roughly corresponded to the Full Moon; Artemis, the Fourth Crescent; and Hecate to the Waning Room and the New Moon, that is, the Black Moon. Revealing feminine principle of life in three phases: the maiden, the mother and the old woman. And Artemis then reveals precisely the phase of the maiden, the virgin.

Because their habitat is the forests, we can assume that Artemis rules the unconscious, the dark regions of the mind, our instinctive and primitive aspects, and the unexplored regions of the psyche. As a virgin Goddess she was immune to relationships, showing an aspect of wholeness, completeness, oneness and integrity. And the virgin Goddesses show us that a woman can choose not to marry and yet feel self-confident and whole.

Another important symbol to speak of is the bow and arrow. To use it is necessary not only to have a good aim, but an appropriate psychological state. Being angry before a hunt meant missing the mark. And the Goddess never missed a target.

Therefore, Artemis symbolizes the search for an inner center where there is balance. Hitting a target, or reaching a goal, requires instinctual intuition and intelligence that does not come from the rational mind. Therefore, it is no use trying to accelerate awareness of obscure aspects. It takes time and waiting. 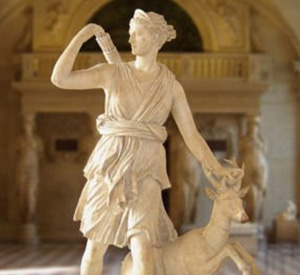 Moreover, in Sun and Moon Mythologies they are usually portrayed with brothers, or lovers. The moon symbol of the unconscious and the sun symbol of consciousness represent a pair of opposites. These are the progressive and regressive aspects of the psyche.

But it is precisely this conflict that brings the creative force of consciousness. Therefore we must withstand this tension represented by the twins Artemis and Apollo for the creative function, the transcendent function to appear and to bring us the consciousness necessary to broaden our horizons.