Saturn in 3rd house tends to hinder and in some cases to block communication, both spoken and written. Sometimes that blockage can be physical - stuttering, dyslexia. They are shy or withdrawn people and their relationships with the environment are usually cold, rigid or distant, and in some cases they can even become isolated or feel isolated. When it comes to communicating, they are always serious and deep, they hate frivolity or superficiality.

Saturn in third house favors in some cases the interruption of communication between the natives and the rest of the people . This block can be both spoken and written, sometimes due to a physical block, as in the case of dixlexia or stuttering.

Their character results from excessive shyness , withdrawn, which makes their relationships with the environment cold and distant, often in the event that they become isolated or come to feel isolated.

However, perhaps most importantly, when it comes to engaging in conversation and communicating with others, they never waste time on superficial and frivolous topics. They go to the concrete and important, thus avoiding dedicating a talk to something that does not interest them at all.

Often people with Saturn in 3rd house do not usually have siblings or have few. The brothers will be of a “saturnine” character or outward appearance - serious, responsible, introverted, realistic - and the relationship with them will tend to be cold. If Saturn is afflicted, the brother may die or may cause the ruin or misfortune of the native. The way of thinking of this is extremely rational, methodical and capable of maximum concentration. They reject intuition, imagination, creativity or the influence of feelings and only take into account everything rational and it has been scientifically proven.

In their way of thinking, the people who have Saturn in 3rd house are very sensible and realistic, practical and with a great deal of common sense. His student days are usually one of the grays, hardest or most difficult of his life, often being a period full of obstacles and disappointments. They have an aptitude for applied science and mathematics. They do not like to travel, or circumstances may prevent them, and the trips they make will almost always be for serious and formal reasons, work or business. They are at risk of lung disease or asthma and also of injury or disability in the arms or hands.

It is common among natives with the planet in this position that they do not have many brothers, or even none. They will also be introverted, serious and responsible, which will make the relationship between them very cold.

In the case in which Saturn is afflicted, the brother may be the cause of his misfortune , and even said brother may die.

They reject everything that is imaginative, intuitive or creative. In general, any type of influence of feelings and only take into account the rational and that it is perfectly demonstrable in a scientific way.

The student season is usually a fairly negative period for the native as they suffer numerous obstacles and continuous disappointments. They are good at mathematics and applied science.

They also suffer loneliness in their school years, with separation from close relatives . It is related to the status of an only child or only one brother, who lacks people of the same age with whom to talk often. It is common that the defects and difficulties when relating to other colleagues are due to their insecurity and fear, such as stuttering.

Travel is not attractive to them , so all those displacements that they have no choice but to do will be for serious and formal reasons, such as work or business trips.

The natives of Saturn in house 3 are at risk of suffering from lung-type diseases , as well as wounds or suffering from some disability in the hands or arms.

An example of Saturn in 3rd house, we have in the letter of Manuel Fraga Iribarne, founder of the Popular Party, the main right-wing party in Spain. Of course, this position can also be held by people on the left, such as the case of the singer Ramoncín. 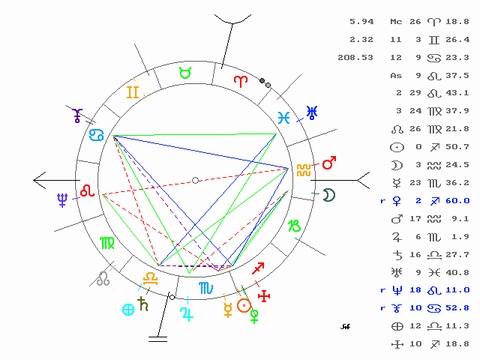