What are fallen angels?

What is the source that speaks of the Fallen Angels?

The origin of the Fallen Angels

Why did these angels fall?

In the history of religions there is a theme that tends to arouse the curiosity of almost everyone: the Fallen Angels, better known as “demons” although this name would not be technically correct.

Where do they come from? Who were they? What are the most important? These and other questions are what we will try to answer.

What are fallen angels?

The Fallen Angels are actually one of the first angels that God created but who turned away from him and began to question him, which caused them to be banished from heaven and, many of them, sent to hell. These are known as Fallen Gods or Fallen Angels.

Certain religions, especially those prominent in the West, teach that fallen angels, once pure messengers from God, followed the Devil (or Satan) out of heaven and onto the earth in rebellion against the Creator.

In this sense, belief is also taught by those fallen angels now who rule the kingdom of the earth as evil. It is an important spiritual conflict, in large part, and with God’s heavenly holy angels fighting the fallen angels who are under the command of Satan (or Lucifer) - the devil.

We prefer a metaphysical view of fallen angels and what they can be in our lives. Let’s look at a few different interpretations to consider.

What is the source that speaks of the Fallen Angels? 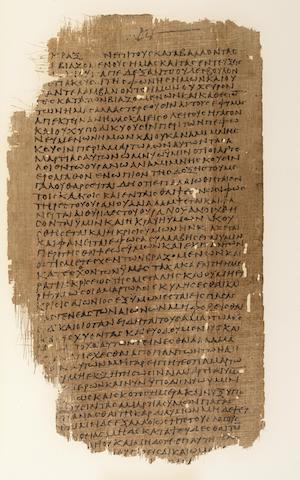 The main source for learning about the fallen angels is the ” Book of Enoch “, an ancient Jewish religious work, traditionally attributed to Enoch, Noah’s great-grandfather , which contains unique material on the origin of demons and giants , the explanation of why some angels fell from heaven, and even an explanation of why the Great Flood was morally necessary.

Studies have estimated that the oldest sections of the Book of Enoch, mainly the ” Book of the Watchers “, date from around 300 BC , and the last part, the ” Book of Parables “, from the 1st century BC.

Contrary to popular belief, the ” Book of Enoch ” is not part of the biblical canon used neither by Judaism nor by Catholicism in general, but only by the Orthodox Christian churches of Ethiopia and Eritrea.

However, most Christian denominations or traditions do accept that this book has some historical or theological interest .

It was found in the Dead Sea Scrolls and is written mainly in Ge`ez (the language of Ethiopia and hence it is accepted in that country), although it also contains fragments in Aramaic, Greek and Latin.

The origin of the Fallen Angels

At first, the Fallen Angels belonged to the celestial group that safeguarded the beginnings of humanity . They were created specifically by God to watch over man, and were given understanding and freedom.

These characteristics led many of these angels to start questioning their creator , moving away from him and committing different “sins” that led to God expelled them from heaven, banishing them to hell.

Most of the angels fell out of lust , but also out of vanity as their main motives.

Why did these angels fall?

Here there are two aspects depending on the source. On the one hand, we find the biblical ones like Lucifer ; but on the other we find the Book of Enoch, where we see that 200 angels fell in total, with Semyazza as the main leader , although not the only one, since there were 20 leaders in total. These are known as the ” Watchers .” 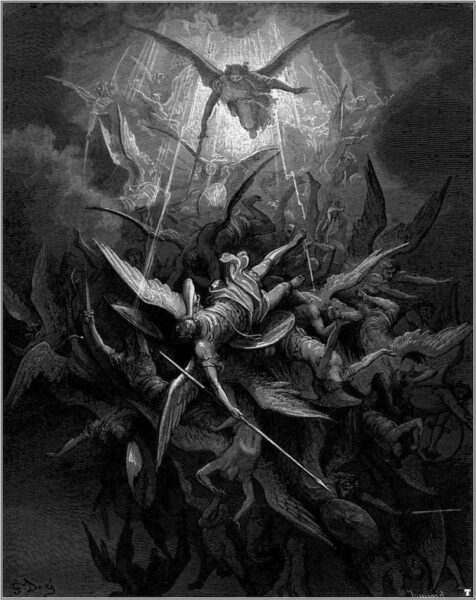 Also called Grigori , they were sent by God to Earth to watch over humanity, they fell in love with the daughters of men, and, after making a pact between them, they married and fathered children with them, knowing what their destiny would be.

His sons were the Nephilim mentioned in the bible, giant demigods, sons of angels and humans.

But it has not only been out of lust, even in the case of the Grigori or Watchers, many fell for teaching men the art of war and the creation of weapons , among other knowledge that created the imbalance among the first men. For this, it must be taken into account that each Grigori is associated with a different type of wisdom .

In Dante Alighieri’s Divine Comedy (1308–1320), fallen angels watch over the City of Dis, which encircles the lower circles of hell. The sinners in later circles of hell are those who willfully rebel against God, such as fallen angels or Christian heretics, as opposed to earlier rings where they are condemned for sins they simply could not resist.

Both obedient and fallen angels play a significant role in John Milton’s epic work Paradise Lost from the 17th century. They appear to be logical people because  they have human-like personalities.  Characters from both Christian and pagan mythology, including Moloch, Chemosh, Dagon, Belial, Beelzebub, and Satan himself, are referenced in the names of the fallen angels.  In accordance with the canonical Christian story, Satan persuades other angels to live outside the dictates of God, after which they are expelled from heaven.  The fallen angels in hell are where the epic poem begins. The earliest description of God in the book is provided by fallen angels, who characterise him as a dubious despot and attribute their own fall to him.  The fallen angels, exiled from heaven, created their own empire in the depths of hell, with a capital city named Pandaemonium. In contrast to the majority of older Christian depictions of hell, it is the realm of the fallen angels rather than the place where God primarily torments the sinners. Even the fallen angels construct a palace and engage in music and open discussion. But without heavenly direction, the fallen angels themselves make hell a place of pain.

In many of Alfred de Vigny’s poetry, the concept of fallen angels is prominent. The kid of an angel and a mortal woman learns about the great deluge from the stars in Le Déluge (1823). But when he doesn’t show up, the water catches them. The 1824 novel Éloa tells the story of a female angel made from Jesus’ tears. She learns that a male angel has been exiled from heaven, and she tries to console him but ends herself in hell as a result. 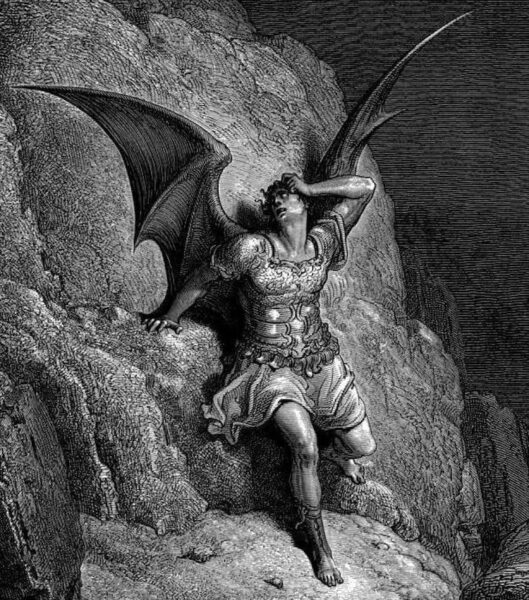 Representation of Satan by Gustave Doré for the epic poem “Paradise Lost”, by John Milton.

Did you know that Lucifer (yes, Satan) was an angel living right next to God? It’s true, he did. However, over time, Lucifer developed bad feelings like envy and greed inside him. Heaven does not allow such emotions. For this reason, Lucifer was banished from the kingdom of God. Thus the first “fallen angel” in the list of top ten fallen angels is Lucifer.

From then on Lucifer (The Devil or King of Hell) brought sin to earth. Consequently he became the leader of fallen angels expelled from the heavenly Kingdom of God. Besides the Devil, nine fallen angels have corrupted men’s lives in some way or another. In time, fallen angels are termed as demonic figures or demons.

God created Yekun among the first few angels. He is the second angel who fell from paradise and the first to follow Lucifer. He is responsible for persuading and misleading other angels from the path of Light.

It was the second angel who followed Lucifer. Kesabel remains almost all the time in the form of a woman. Kesabel propagated sin by inducing seduction in men.

God banished Gadreel from heaven. His sin was to teach about death and how to handle swords against others entities including angels.

Penemue placed the knowledge of reading and writing befor humans. In some sense his knowledge led men to lie and to turn the course of truth.

Abaddon is the demon who has lost his place in heaven because he likes to destroy things. It is believed that Moses invoked Abbadon to devastate Egypt with a natural disaster. So, Abbadon is also known as the “destroyer.” 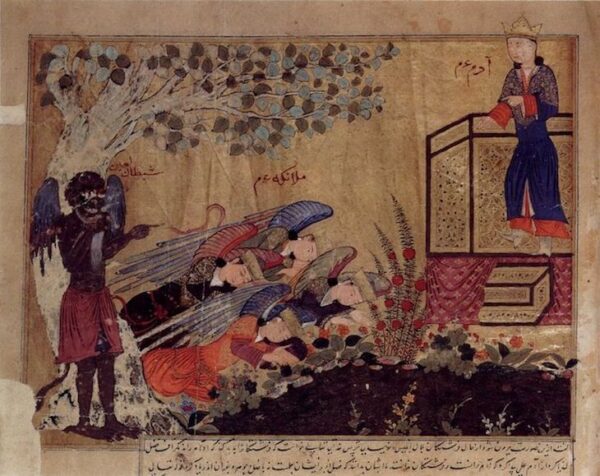 Azazel, depicted in black, refusing to prostrate himself before the newly created Adam. Illustration from the Arabic manuscript “Annals of al-Tabari”.

This demon introduced the art of weaponry to the world. This facilitated the production of swords, knives and armor. The art of weaponry has caused bloodshed and countless untimely deaths to occur. Azazel closely resembles the fallen angel Gadreel. They both know how to use deadly weapons.

Leviathan is one of the worst demons. Known for pride and heresy, its fallen form is a combination of serpentine and dragon-like appearance.

This fallen angel has lead thousands of demonic entities. He persuaded many angels to come to men’s land after women.

Kasyade was the last significant angel to fall to hell from the Kingdom of God. Before the fall he was a teacher of astrology. After the fall this demon taught men the wicked strokes and strikes on embryos, demons, spirits, and souls. This deviated the natural harmony in the lives of humans and their position and importance before God.

Patrick the perky Pisces man, as we call him. He began his journey to prove the contradictions to the astrological facts. His is the most interesting story because on his way to prove them wrong, he actually ended up accepting it. Not only accept but further work on it, know and share about his learnings. We are sure you will love his work on mytodayshoroscope.com!