Why do your relationships flee away from you in the very beginning? 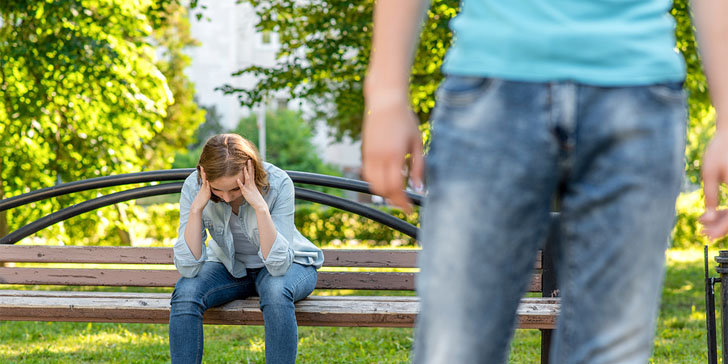 It seems that “ghosting” is fashionable. You start to meet someone, everything seems to be going well but suddenly, click, it disappears. Surely it is because he is taking an impression of you that is not, or perhaps it is because your character scares him or it is most likely that the problem is he / she has it. In this article we analyze why your relationships run away from you at first according to your sign. Do not miss it.

Often that sarcasm that you use in almost everything, makes you think that nothing and nobody matters enough to you. It’s like you hesitate a bit. Probably, without anyone knowing, that person matters too much to you, but apparently, it does not seem like Aries, and that is the problem. If that person runs away from you at first, it is because they think you are not serious. Hasn’t it happened to you already?

Your labels will always haunt you Taurus. You are responsible, focused on your goals and very very stubborn. With these qualifiers, anyone would say that you are a super serious person, but it is not at all like that. In love, almost the opposite happens to you, you have a joy that seems even childish, when someone begins to like you and you see that it is reciprocal, the smile does not disappear from your face and you act as you act because you want your relationship to be fun . Well, look where, if they flee many times it is because it seems that you get too involved. Very sad that they think that when all you want is to be well, happy, content and not fall into something boring or frivolous.

Maybe when you start a relationship and suddenly it disappears, you wonder if you are doing something wrong. Well, Gemini, if that person “ghosts” you, it is because your indecision eats him up inside. The problem is the interpretation of that indecision. That person believes that this confusion comes because you have many doubts and because you do not know what you really want. You, you know that you really only worry about making the wrong decision. It is not any kind of doubt about what you feel.

If at the beginning of a relationship that person suddenly leaves, it may be because of your lack of opinion. Which is not actually so, but it seems like it. They are very wrong Cancer. Sometimes, it seems that you always agree with others for fear of arguing. And it is not that, simply that very often what you want is to see others happy, and you know that the vast majority of the time (and with some people) it is more important to have peace than to be right. For here are the shots…

It is very likely that if someone runs away from you at the beginning of meeting you it is because you are too intimidating Leo. Yes, things as they are, when you want something you go to death for it. And that something also includes “someone”. You get so insistent that sometimes, they prefer to leave until the emotions and feelings subside a bit. You want everything to go perfectly and sometimes this is too much pressure for everyone else.

If someone runs away from you at the beginning of a relationship, it is because sometimes, you need to have so much control of situations that you seem a bit bossy and you see an image of you that does not correspond to reality. You like to be in control so that no one else has to worry about it, so that person just gets carried away and enjoys it. But there are people who can flee from all this because they have the same strength and the same desire and the same energy as you to carry those reins. And if things are not talked about, there may be too many misunderstandings.

If that relationship runs away from you at first, it is because he sees you so nice that he thinks everything is too false. And it is that, you are as you are from minute one, you are not pretending anything, you are simply optimistic, happy, cheerful, and you try, however, to do the best possible thing. There are always two ways, to do it well or badly, to do it with desire or without them. And you, you have very, very clear how you want to lead your life. If the rest run away from what is beautiful, what is good and what is healthy, it is not your problem. Better.

Your honesty is what separates those relationships from you in the beginning Scorpio. Yeah, the way it is, you really just want to be authentic and real from minute one, but some people don’t seem to like that attitude very much. You are not a big mouth person but you are not going to shut up when you think you should say something Scorpio. That’s for sure. And that is also why many times they flee from you ... Because they fear you. People are supposed to always want the truth, but when the truth comes, sometimes they don’t like it that much.

When you start a relationship you seem a lot more serious than you are. As if you could not get all those feelings that you have inside at first, as if it did not come out ... And the fact is that, despite that reputation for being funny and funny, it takes time to get it out. And even more so when it comes to someone you are meeting… You have to relax Sagi and that takes a while. For that reason that person may run away from you at the beginning of everything, because he sees you too straight, stoic, imperturbable.

You are a super intelligent Capricorn person but sometimes, that intelligence is what makes your relationships run away from you at first. It makes you seem a little pretentious, conceited, conceited ... When in reality it is not like that at all. On the contrary, just as you consider yourself an intelligent person, you also admire this of others. First because you like knowledgeable, experienced, documented people, and second because you love to talk about super deep topics. You love having those kinds of conversations. People are very confused with you.

If your relationships run away from you at first it is because your relaxed attitude makes you look a bit crazy with everything, as if you did not care, as if you did not have as much interest in meeting the other person as she may have. You really just like to get carried away, you don’t plan anything and you wait to see what happens. Simply that. You are a person who flows with life Aquarius, and not in addition, you do not like to force anything. But there are people who need much more security throughout Aquarius, that you are ... Even if you are ... You really don’t understand.

When a person you have just met runs away suddenly, it may be because they see you with a person with a lot of character in the background. You are sensitive, a lot, but that does not mean that you are weak. And many people are surprised when they really know you. They saw you as a fragile little lamb and suddenly they realize that you are much more than that, that you can have a character of a thousand demons when they hurt you, that you will not pass a single ... And the truth is that Pisces, is that they enter panic. They can’t control you.