What Are The Signs of Zodiac and Their Elements? 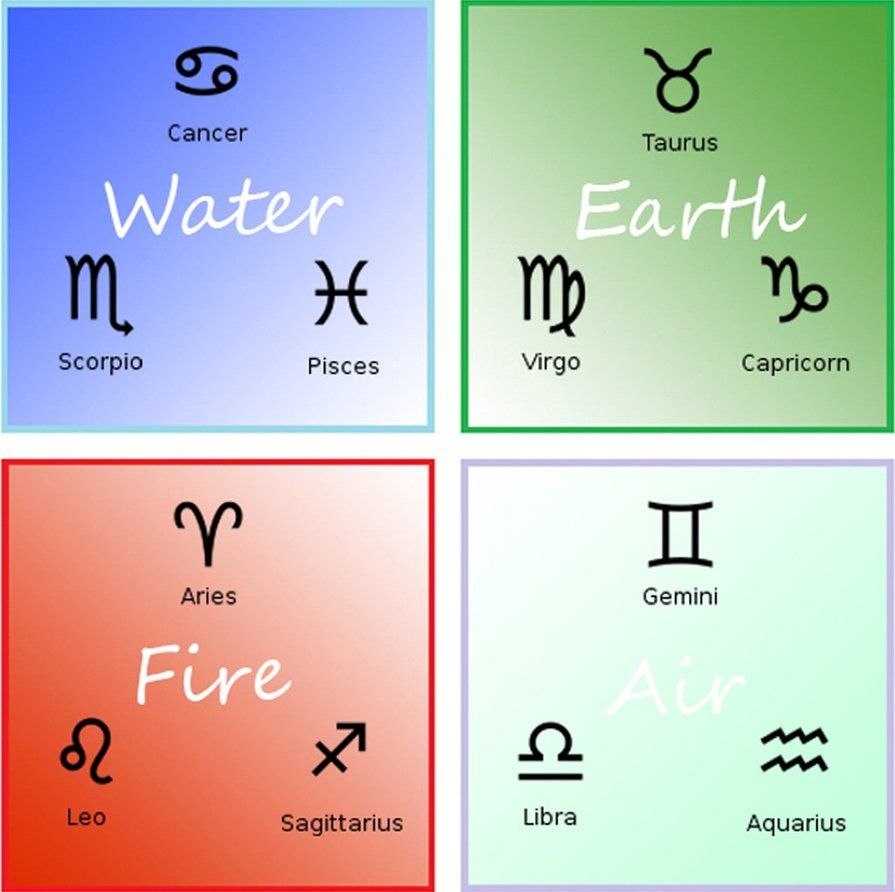 Each sign of the Zodiac is associated with one of the four natural elements of the earth: fire, earth, air, and water. Signs with a common element have many extremely similar attitudes. The four elements represent the way we perceive the world as well as ourselves. Most people have some kind of connection with all the elements, although one or two always predominate.

Fire signs are characterized by being impulsive, active, bossy, proud, conquering, and by their passion to arrive and be the first in everything they set out to do. In this, they are tireless. They have great self-assertion and drive. They can become aggressive and angry as well, they do not usually think more than twice about things and are totally guided by their impulses. Many envy them because of their power and inner security.

The Aries fire is a primal, impulsive fire, an enthusiasm that burns away quickly.

Leo’s fire is a proud fire, an inner fire that burns permanently and does not want to pay.

Sagittarius fire is a fire that is fanned by a cause. It is perhaps, within the fire signs, the least agitated, or rather, the one that is able to better control its states and its inner flame.

It may interest you: Differences between fire signs EARTH SIGNS

Earth signs are characterized by the need to obtain concrete results, they analyze each of the situations in their life and try to select what really interests them and does them good, they try ...

Earth signs, moreover, tend to be ambitious, sometimes somewhat materialistic, careful, hard-working, and persistent in what they really want to achieve. They can lose the north on some occasions but end up getting back on track with almost no problems. They are also quite cautious, that is, what they do, they try to think it through so as not to fail. They do not like people who are too in the clouds, they prefer to be practical and real.

The land of Taurus is solid, fertile land, that is why it is protective of its own, perhaps sometimes also possessive. You keep an eye on what’s around you and don’t want anyone to get in the way and cause trouble.

The land of Virgo is similar to quicksand, it is abstract. Virgo needs to analyze, select. Despite the fact that his feet are on the ground, he is not closed to other possibilities or opinions, but yes, it is easy for him to be moved from his place.

The land of Capricorn makes one think of the mountain, of a summit that must be reached, on a rock, it is a cold, dense, rocky land. Capricorn is strong, although sometimes he can fall, he knows what he wants and what he does not want. He always tries to climb, position himself, reach the top in what he has set out to do.

It may interest you: Differences between earth signs AIR SIGNS

Exchanges, intelligence, adaptability, criticism, assimilation, or intellectualized thinking are some of the characteristics of air signs.

They love good communication, interacting with others, smart people but not smart people. They express each of their emotions with just a look or a gesture. They are usually talkative, the vast majority, and they detest loneliness. They seldom take time for themselves.

The air of Libra makes us think of a sweet, gentle breeze, in the search for harmony, in the abstract, in the need for exchange.

The air of Aquarius makes us think of the air that unites some beings with the world, in the propensity towards the collective, in the ingenuity, in the intellectual faculties.

It may interest you: Differences between air signs WATER SIGNS

The memory, the unconscious, the dream, the influence, the instinct, the fertility, and the sensitivity are some words related to the water signs.

At the same time, these signs tend to have constant emotional ups and downs, although, in the case of Scorpio, he is the one who knows best to hide them. They may have more than one depressive episode, probably because they cannot find the answers to a problem.

Cancer water is clear, crystalline water, and it makes us think of fertility, of the mother, of the flow, in the dream, in the imagination, in our unconscious, at night.

Scorpio water is turbulent water, which moves from here to there always trying to find answers. It is potentially instinctive and is not content with just standing in one place. It needs to move to grow, to regenerate.

Pisces water is water with two streams, two dreams, two paths. He is always at that crossroads. You need to make up your mind and sometimes you don’t know how to do it, you need to choose but you don’t want to fail.