Ten Commandments of the Catholic Church: What are they?

These are the ten commandments of the Catholic Church:

The meaning of the Ten Commandments

The Catholic religion speaks of the Ten Commandments as a series of religious imperatives based on the biblical commandments that God gave to Moses.

The Ten Commandments were given to the Jewish people more than 1,000 years before the birth of Jesus. But they are also a guide for Catholics, so we are going to see what the ten commandments are for the Catholic Church and what is the meaning of each of them.

Every society and institution needs its rules, and in the case of the Catholic Church we can say that they follow the Ten Commandments that Moses received from God on Mount Sinai. These Ten Commandments contain a list of religious and ethical rules that are of fundamental importance in Judaism and Christianity. A series of commandments that man must have fulfilled before receiving penance and that for Catholics is analyzed through the so-called examination of conscience.

A series of rules that, although well known by most people who have received a religious education, the truth is that the meaning of each of these ten commandments is rarely mentioned, so we are going to list them below and then we’ll see what they mean.

These are the ten commandments of the Catholic Church:

The meaning of the Ten Commandments 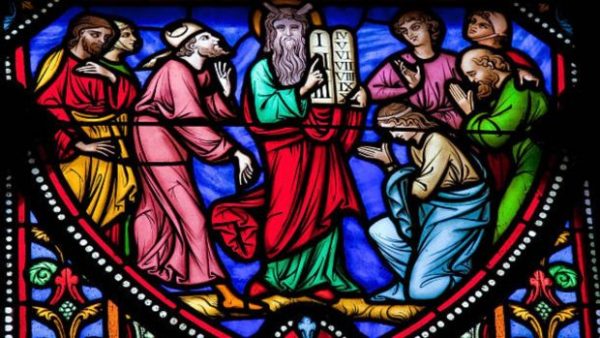 During the migration of the Israelites from Egypt back to the Promised Land,  God called the shepherd Moses to Mount Sinai. According to Old Testament tradition, God announced the Ten Commandments to him there. To this day they are the guiding principles of Christian values and, as we have mentioned, the “rules” that govern the Catholic Church, determining. the person’s attitude towards God and towards the neighbor.

Historically, the word law or mandate should be understood more as a sign, so the Ten Commandments are understood as a great gift from God, especially because it showed the individual and the people how life can be successful.

The 10 Commandments are found in the Bible in Exodus 20:1-17. Let’s see below the specific meaning for each of them.

You shall keep the feasts holy:  The third commandment has to do with special devotion to God. Separate days are provided for this worship of God: namely, Sundays and holidays. On these days, all Christians are required to come together for a common worship service. However, these days must also be sanctified throughout their course so that man can reflect on God in a special way. At the same time, these days are also meant for community, joy and relaxation.

You shall honor your father and your mother  : This commandment refers to the correct relationship between children and their parents. The fourth commandment also applies to the family as a whole: it promotes the development of the family and protects it from certain dangers.

You shall not kill : The fifth commandment is clear. It prohibits the killing of humans and protects life against various attacks. Since human life is today in danger in many ways, this commandment covers many areas.

You shall not commit impure acts : The sixth commandment protects love and specifically, the institution of marriage and opposes attitudes and behaviors that endanger leading a pure and decent life. It defends certain values that are necessary for love to triumph.

You shall not steal:  This other commandment is also very clear, we must not steal or take anything from others, but rather help them prosper and protect their possessions and income.