DIY - All About The Homemade American Carnival Doll

Why is the Shrovetide doll burned

How to make a big Shrovetide - a scarecrow to burn

A popular option for making talisman dolls on the Internet

How to make such a carnival doll? DIY

What rules should be followed

Easter is the most important and brightest in Christian history. However, before it comes, believers must observe the fast, which begins with Shrovetide, which lasts exactly seven days. At this time, pancakes are traditionally eaten, and mass festivities take place in the city squares. All this is accompanied by the fact that winter is leaving, and it calls for a reason to rejoice. The people rejoice with funny songs, dances, music, and various competitions take place, and a scarecrow is burned, which is called the Shrovetide doll. 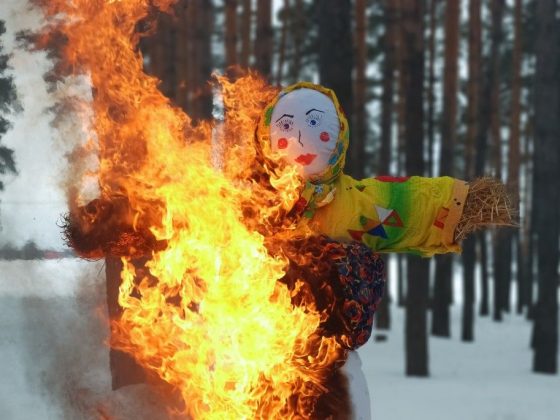 This tradition has its roots in ancient times from the Slavs. They believed in symbolism and followed many traditions, many of which have survived to our times. Among them particular importance was given to the existence of traditional dolls carnival (Shrovetide). We learn about their origin and meaning in more detail.

In general, a carnival doll or homemade carnival is a very symbolic item that has long been considered a powerful carnival charm that protects the family and the hearth. It looks like an ordinary rag or paper doll, made from improvised means by using paper, rags, bast or straw. But every detail of it is a symbol that we will try to learn about in more detail.

The skirt of the folk doll is homemade carnival, always magnificent and long - this is a symbol of the sun. The handles always directed upwards - in the direction of the  sun, a request that its rays warm the earth faster.

Usually, the Shrovetide doll is made on the eve of the carnival holiday, which, by the way, in 2017 fell on the period from February 20 to February 26. Its dimensions are small, about 25 centimeters in height. Previously, such a doll was stored in a special place, it was also called the red corner, then, after the Pancake week, it was put on the windowsill for viewing by the sun. It is the sun that plays a primary role in this holiday. During the winter months, people pretty much miss the warm days and look forward to warming.

In addition, women in difficult moments of life shared their experiences with the doll for a whole year, whispered to her about difficulties and problems, making peculiar conspiracies. And on Shrovetide, they threw her into the fire so that all adversity would pass along with the tongues of flame.

Why is the Shrovetide doll burned

As already mentioned earlier, Shrovetide is an old rite. The meaning is the death of the old and the birth of a new life by sacrificing a straw made effigy doll. Pancake week is a certain invisible line between the leaving winter and the coming spring. It was believed that together with fire, people could free themselves from fear, anger, and all the negative aspects that could accumulate over three long cold months. It is for this reason that unnecessary old things, clothes, and half-eaten pancakes are thrown into the flames, for being cleansed before the beginning of Lent.

It was considered obligatory to throw carnival dolls into the fire, which were made by the craftswomen. This is done after festivities and merry jumping over the fire. Now you can learn how to make such a doll all by yourself at home. Read the section below to find out how.

In order to make a small-sized carnival doll, you will need to complete a number of simple activities and the following materials:

However, the doll lacks one important detail - the hands. The easiest way to make them is to attach two cut brushes to the body. Now your product is ready.

How to make a big Shrovetide - a scarecrow to burn

If you live in a private sector or have plans to burn a large stuffed animal in the yard with friends, you can make it with your own hands of their improvised means. In order to answer the question of how to make a stuffed animal for Shrovetide, you will need for a master class:

So how to make a stuffed animal for Shrovetide with your own hands? The manufacturing process itself is step-by-step and is carried out in stages:

A popular option for making talisman dolls on the Internet

Today there are many variations on the theme of making a carnival doll with your own hands. Let’s give an example of the one that is the most popular and is often used for joint creativity with children. It is called paper carnival or homemade carnival. It is a do-it-yourself carnival made of colored paper. A more detailed description can be found in the photo from the master class.

Materials you will need:

How to make such a carnival doll? DIY

As you can see, there is nothing difficult in this option, so you can use this method together with your child, teaching him or her to be creative and involving him or her in the old Russian and Slavic traditions. All you need is a fantasy and a minimum of technology.

What rules should be followed

In order for the made doll to perform the duties assigned to it, you need to adhere to some rules, which are given below:

Now you know how to make a carnival doll with your own hands. In conclusion, it is worth saying that a DIY carnival doll is a kind of amulet and a magical item that is endowed with meaning during the manufacturing process. It is important to show maximum imagination and skill so that the doll fulfills its purpose. And at the appointed hour, during the burning of the Maslenitsa effigy, she took into the fire all the hardships and problems that had accumulated in your life.