A Brief Introduction to Umbanda Religion 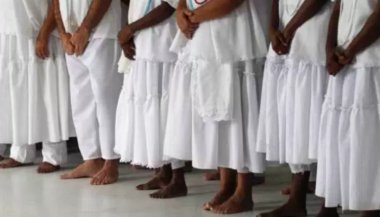 A mixture of various religions

It is no secret that there are still many prejudices against certain religions - which religion does not suffer from a little discrimination? But, especially with spiritist religions, the bias tends to be even greater.

It is important that we know the religions and what each of them believes before defining our own opinion. That is why, we are sharing ten curiosities that few people know about Umbanda, a religion that suffers a lot of prejudice. Check it out below!

A mixture of various religions

The first curiosity of the list has to do with the emergence of Umbanda, which is a mixture of several religions. Umbanda is a derivation of another word in the Kimbundu language, the Angolan language - the word m’banda, which means healer.

The religion combines elements discovered and developed by Alan Kardec, therefore, of Kardecist spiritism, elements of Afro-Brazilian and indigenous cults, in addition to aspects of Christianity, Catholicism, and esotericism.

The use of images of Catholic saints began in the early days of the Umbanda religion, when the slaveholders used physical punishment on their slaves, such as lashes, for example.

At the time, the masters used the images of saints to protect themselves and their families from slaves’ macumbas taken as revenge for punishments. The lords forced blacks to worship Catholic saints. Over time, the saints were associated with entities of the spiritist religion.

When you have no color, you see black; but white is obtained when all the colors are mixed. White is the sum of all colors. As each color has its properties, type of energy, and function, using white, you have all the good things from colors, including the purity and peace of white itself.

Besides, Umbanda clothing should be taken very seriously with respect. Therefore, whoever wears them should wash and keep them separate from all the other clothes they have. It is also impossible to walk on the street with them, as it should only place it at the place of worship.

Bringing the head to the ground represents the submission of the human being to entities and nature. It is a sign of respect for religion and mediumship, as well as for all entities present. This shows that the human being knows how to put himself in his proper place.

Besides, this act also represents a thank you. It shows that the human being is grateful for that moment and for the help he is receiving. Therefore, the act of hitting the head is seen as an indispensable act.

Atabaques receive great importance in Umbanda and organs, who are the percussive musicians of this instrument. Considered objects of great respect and white clothes, atabaques must always be kept with great care.

And why are they so important? According to religion, the instrument’s touch and vibration help the medium incorporate more easily and naturally. And each beat has a different purpose.

The use of candles in Umbanda has a specific reason, which is very different from using candles for the Catholic religion, for example, even because the practice of using this item in Umbanda arose thanks to Catholicism.

It is as if the candle works as a beacon for the spirits, indicating a brighter and easier way for them to approach.

Contrary to what many people think, exus are not evil or malicious. It’s the opposite extreme. For the Umbandista, exus are serious, hardworking, and guardian entities. That is, they seek to help.

What many call exus are quiumbas, entities of bad behavior. They do what they want.

For Umbanda, reincarnation does exist. Disembodied spirits are among us with the function of helping us and giving us warnings. That is, they are not here for nothing, according to the doctrine.

But it is not any spirit that manifests itself. Those who are already highly evolved come into contact and, therefore, no longer need to reincarnate in other bodies. In this phase, they manage to keep themselves as spirits to get in touch with humans to help reincarnate souls keep the evolutionary path.

It is very common for religions to receive ramifications over time. The ramifications are nothing more than the religion itself, but with some customs and thoughts different from the original idea. In Umbanda, there are several ramifications:

Perhaps the biggest misunderstanding about Umbanda concerns macumba. Macumba, in reality, is a musical instrument (a type of reco-reco) used during religious tours.

The derogatory and negative meaning of the term has emerged over time. But in reality, in the real meaning and sense of the term, macumba is the reco-reco used in girls, and the macumbeiro is the one who touches it.